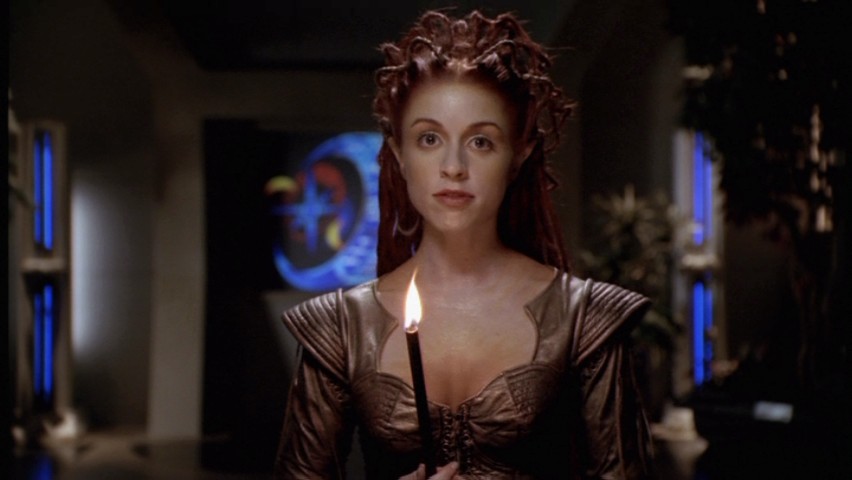 It is with much sadness that I pass on news, via Facebook, that a member of the Andromeda fan community has passed on, in late March of this year.

Liz Jones was one of the first people I met in this fandom. She was a warm, friendly soul who always brightened my day when she checked in with me. In later years it became infrequent and I know in her little region of Scotland, sometimes internet was difficult for her. When she did check in it was always with interesting subjects and sharp wit. We could chat about Andromeda at any time.  She will be sorely missed.

Andromeda discovers a planet of Commonwealth survivors and descendants gathered together by Dylan's former fiancé after the Commonwealth fell, including the genetic reincarnation of Dylan's first officer Rhade, but when the election to rejoin the Commonwealth goes against Andromeda's crew, an apparent Magog attack raises several questions.


I like that this episode wraps up the last of Dylan’s links to his old life, his relationship with his fiancé. But once again the writers went hard on the Rhade/Dylan ship, going to the extent of reincarnating his former first officer.

Immediately after this Dylan abandons the idea of restoring the Commonwealth and just focuses on a defence pact, so it actually holds together quite well psychologically.

NB: The 18 month break in reviews was due to selling my house, moving house and various health issues for my kids and for me.

I don't know if anyone's still around to read this post and, idk, maybe this is already common knowledge and I'm late to the game, but just in case here's a PSA:

All five seasons of Andromeda are now available on Amazon Prime Video, at least in the US.

With a deadly plague on the loose, Andromeda, captained by the inexperienced Harper escorts medical ships through Drago-Kazov space while Beka seeks stragglers from the convoy. When both Beka's ship and her enemy ships are damage by each other, both women talk as they work to get their ships repaired in order to destroy the other ones ship. Harper finds being a captain is not as easy as it seems. In the end, Beka proves she is the better repair man, and destroys the enemy's ship, but not before both women get the chance to understand each other's families and cultures. Dylan and Tyr try to stop the missile batteries trained on them; even if it means killing themselves along with their enemies, making the enemy surrender, but at a cost of wanting not just Tyr dead, but Andromeda's crew as well. Dylan gets an explanation about Tyr's "special cargo," which causes him to mistrust Tyr's intentions. After their mission is complete, Dylan denies Tyr access to his cargo, which in turn causes Tyr to mistrust Dylan, and that his "little stunt," has proven that he is vulnerable.

I liked this episode too - a bit of a roll. The Tyr plot was progressed a bit, and I loved the Harper plot. He is not a natural leader and it was good seeing him challenged.

I like the concept of the repair-off between Beka and the Nietzchian but it was undermined by the fact that she looked so much like the actress playing Beka that I kept wondering if it was some kind of dream sequence. Once again, life for Nietzchian women seems pretty grim, what with the endless emphasis on reproduction.

While Rommie tries to save a defector from a planet that hates AI's, the Eureka Maru plunges deep into the ocean after being crippled, leaving Harper, Tyr and Rev struggling for survival as Dylan, Beka and Trance attempt to stop a planet-destroying ship armed with Magog weapons. Sadly they fail, so they rush back to save their crew. Back on their crippled ship it soon becomes up to Tyr and Rev to save the ship, for Harper overdoses on his medication to keep the Magog eggs from hatching and falls into a coma. Rommie defector is killed by its people. She finds out that the planet has allied themselves with the Magog and have a Magog ship; she steals the ship and rescues Rev, Tyr, Harper, and the Eureka Maru.

OK, I really love this episode. I like the plot line with Rommie proving her humanity again. Of course I like the Byers actor in the background, becoming convinced of her worth. But what I find most fascinating is that yet again it is strongly hinted that the roots of android hatred lie within the Commonwealth and did not come out of nowhere once it fell.

And the underwater plot rocks for me. I was always a Harper/Tyr shipper (though on rewatching I see how cool Harper/Rommie is, also the strong Harper/Beka friendship). I can see no motivation for Tyr rescuing Harper other than affection and trust.

While Andromeda investigates mysterious attacks on an isolated, somewhat xenophobic Inari, Trance is interrogated by that same species as they try to determine her origins, blaming one of her kind for inciting a recent war.

The 'Made of Awesome' icon seemed appropriate for such a Trance-intensive episode. This was a really interesting episode - with the gradual revelation that another of her kind had been there, toying with the planet.

Trance's usual evasions came across as much scarier than usual.

2.3 "A Heart for Falsehood Framed"

The crew must steal a jewel being fought over by a greedy Drift-owner and the Than to organize a peace treaty, but matters become complicated when Beka develops a relationship with the security chief on the station, who is a former thief known as 'Schrödinger's cat'.

OK, I guess, but a bit of a space filler. I do like their rap sheets.

Sorry no time for more detail at the moment - just squeaking in on the weekend.

While Harper and Rommie try to cope with their recent 'violations' by the Magog, and repair the ship with Trance. Dylan, Beka, Rev, and Tyr, are pursued by a gang of Nietzscheans, while returning with spare parts for the andromeda and are forced to make a crash landing on an icy planet. They must escape and before Rev Bem's desire to feed either forces him to kill or causes his body to digest itself.

Fabulous opening, with my favourite part being Harper saying that he really needs to hear that 'where there's life there's hope crap'.

Having just typed in the airing date, this must have played well at the time given that the show re-aired just after September 11.

I hadn't seen it prior to the rewatch - I am horrified by Rommie making Harper clean up and the whole frozen planet sub-plot was unnecessary though well made.

Harper accidentally activates a hidden personality stored away in Andromeda's system, causing her to forget the events of the past few years and re-enact a top secret mission. Since the mission pre-dates Dylan's assignment to Andromeda 300 years ago, he and the crew are powerless to stop the ship. While executing this mission, Andromeda becomes overrun by Magog.

What a great season end!!! That final shot of the crew lying on the ground as the ship calls out for help.

An aside - It's like the end of Blakes Seven! The actual end!

Finding the Magog world ship - good reveal. And Harper and Tyr have finally got to the point where they are working together. 'Shall we dance?'

Beka attempts to pilot the Andromeda to Tarn-Vedra, the old capital of the Commonwealth which was cut off from the slipstream in the war. The stress of prolonged slipstream navigation causes her to become stressed and exhausted, but she seems addicted to the idea of succeeding. In desperation, she starts taking the psycho-stimulant drug Flash, but she succumbs to its effects and nearly dies from an overdose before Dylan and Harper can stop her.

This is such a great season finale. First of all, I appreciate the way it links us back to the beginning of the season with the Mad Perseid's map and also the overrides that Harper left in Andromeda.

The flash plot with Beka is slightly forced but at least rooted in earlier episodes.

And I like the interplay of characters in the background, Harper deliberately reaching past Rommie to get her attention; Tyr being happy to have Beka use Flash until she isn't winning.
Collapse